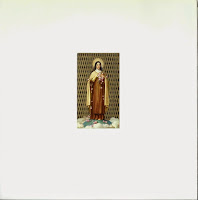 If you're looking for instant gratification in the arena of power pop you need not stray much further than the first "communion" doled out by Buffalo's Girlpope in the guise of this ace 45, circa two decades past.  Bearing canny prose, irresistible hooks and lite garage-rock finesse Girlpope played it clever and straight-up - or for that matter straight-up clever.  The 'popes followed this offering up with two highly recommendable full lengths, Cheeses of Nazareth in '96, and the later and even greater Whole Scene Going right around the turn of the millennium.  Both can be had from P22 Records, with the latter also obtainable thru iTunes.  By the way, a limited allotment of 100 copies of this record were fastened to a plank with a nail, and sacrificed for a mere $10.  In case you're wondering I never sprung for the "deluxe" packaging.

A. Teenage Jesus
B. She

Thanks. This is really good. I am going to check out his newer stuff.