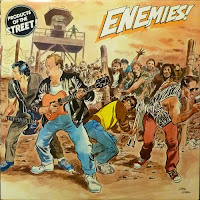 Also known as Billy Piranha and the Enemies, Buffalo, NY's Enemies were a talented and entertaining punk quartet who released this stimulating and scintillating ep some 35 years ago.  Their only brush with fame came posthumously in the mid-90s with the Goo Goo Doll's adaptation of "Disconnected" appearing on the the bazillion selling A Boy Named Goo, which no doubt helped the then defunct members of the Enemies with the rent for a few years.  Products of the Street wields something of a pedestrian bent, and even for the era must have been a bit derivative.  "Test Tube Baby" pirates a saucy Ramones riff, and intermittently there are telltale glints of the New York Dolls and Heartbreakers apportioned on the remainder of this platter.  Despite these rather apparent homages, the Enemies possessed some searing rock and roll chops, and the record speaks for itself.  Guitarist Joe Bompczyk (aka Billy Piranha) passed away in 2011, but the surviving members have reunited as recently as last year.

By any chance would you happen to have anything by So. Cal punk legends the Conditionz?

Great record! A very nice score indeed.
And the Conditionz! Dang! Haven't thought about them in years! Good call.

I'll see what I have by the Conditionz. At least one record I believe.

Could you re-up this somewhere? It is just about impossible to find this...

Is it just me, or does "Deborah" foreshadow "Diane" by Hüsker Dü?

could u possibly re up the link ? Would love to hear this one...