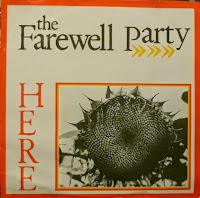 Today's artifact comes courtesy of four Yankie expatriates residing in Germany, at least at the time of this recording.  Hoping to follow in the footsteps of the Fab Four perhaps?  Nah.  Instead, the Farewell Party exude artful shades of Felt, the Go Betweens and the Velvets tossing in some lightweight paisley sparkle when it suits them.  Sounds like a fetching recipe (and it is) but this combo is undercut a tad by it's coed commandeers, David John and Lois B., or more specifically their vocals which perilously veer tone deaf more often than not.  Despite the duo's arguable deficiency on the mic, Here's opening shot, "Terez Batista" is brilliant - a mildly baroque, jangle pop piece that arouses as one of the finest left-off-the-dial propositions from this era I've encountered in ages.  "Runaway Horses" is probably the next most convincing specimen in the Farewell Party arsenal, and a subtle but imaginative reworking of Nick Drake's "Things Behind the Sun" is another highlight.

Well, with those name drops I have to check it out.

I knew you weren't likely to resist.

Only got to listen to about half of it today. The best of those, including the opening track, crossed my threshold, but some of the others were just so-so, although always with a pretty clear intent. We shall see. In any case, looking very far ahead, I could see the lead track on Best Of Blog 2015!

Hi could you re-up this one please?
Thank You!

I was the guitar player and one of the song writers on this album. There was a follow-up record produced by Kevin Lycett of the Mekons which never came out. The singer, David G, passed away last year quite suddenly. One of the drummers joined Dragstrip 77 and I joined Mondo Topless. I look back fondly on this record despite it's obvious flaws. I glad you found the bright spots. David wrote nice lyrics.