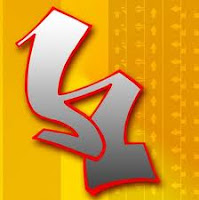 This is a follow up to a clever (at least my idea thereof) various artists mix I put together last month with artists sharing nothing more in common than the letter "P" as the first letter of their respective monikers.  I explained that on my overloaded hard drive, for almost every complete album I have by an artist, I store just as many random one-off songs by artists I don't have a dedicated folder to.  These random one-offs have been corralled into "letter folders" A through Z. I often forget these particular folders exist, that is unless I feel the urge to hear a specific track.  Occasionally, when my MP3 player has available space, I'll drag one of these 26 letter folders on there to play at work.  Despite the disparate genres that run into each under this first-letter alphabetic scheme, I'm invariably treated to a fun and eclectic listen.  Today I'm going with letter #8.  Currently, the "H" folder residing on my hard drive stores 124 files, but for your amusement, dear reader, I have whittled that down to 15.

As was the case with the "P" mix from September, I'm not going to spoil the fun with a full track list, but here a few items waiting in the wings, should you opt to take the plunge: A pair of Nick Lowe/Rockpile covers, a few words of wisdom imparted by Howard Zinn, a choice Hanoi Rocks outtake, Muzak-ed Hey Mercedes, a milf cover, and an offbeat Japanese pop nugget.  By the way, if anyone can give me a lead on the Hope Chest song I've included, please give me a shout out, as I'm way eager to hear more.

sweet. hey, have you ever posted this soundtrack? i was listening to the throwing muses song on it that's also on the new anthology, and i had it years ago...but don't know where it is. if you have it, would you mind posting it?

Saw the movie, don't have the soundtrack. I'm pretty sure the fIREHOSE song is unreleased.

Nice CD! I recently read about this mix and well people are happy and comfortable with it but people are waiting the xlpharmacy Christmas mix.

Hi, my name is Ray and Hope Chest is my band! Go to hopechestmusic.com for links to our various sites. Our entire back catalogue is available for free download from last.fm and we're giving away a free Digital 45 every month this year at our facebook page.

Thanks for listening, mate! Want a free shirt? =)