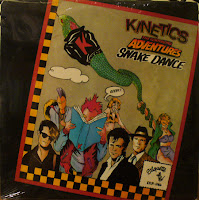 Considering that it's received a hair over one hundred downloads, I'm surprised no one left a comment regarding the Kinetics single that graced these pages a year and a half ago.  Suit yourselves, but I couldn't get enough of that 45, and was promptly on my way to securing this album.  I was downright gonzo for the mild 2 Tone undercurrent that informed the songs occupying that 7" ("Hey La La Lee" and "Take a Train," both of which are repeated here).  Snake Dance doesn't overemphasize that pop-ska motif, and in fact it's eschewed altogether on several tracks that would mesh perfectly with say, a 1982-era MTV playlist.  Alas, the Kinetics were far from brash innovators (an accusation to which they would almost certainly attest) but so long as you can get past their rather traditional tack, Snake Dance is a record you'll be returning to more than you might imagine.

I used to have this. Been looking for it. Thank you so much for posting it. It's a righteous slab o' licorice pizza

Thank you very much for this record. Always fantastic music in this blog.

Is this the Kinetics from Dublin, Ireland or NYC? I've been trying to find out more about the band.

As far as I know this band is from Seattle.

It is an interesting band, it sounds very good, great review.
Generic Viagra

Hi any chance to repost? Cheers.