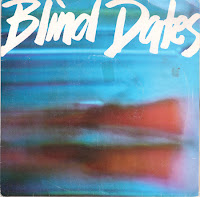 It's not often that I'm enamoured by a band that's so slavishly groomed for Top-40 playlists, but I'm going to make a big exception for Blind Dates if only by virtue of the notion that Top-40 radio in their day was tolerable, if not occasionally enjoyable.  Fittingly enough, a song titled "Radio" occupies one half of this single, sounding like a subtler variation of Hipsway's "The Honeythief" (or maybe it's the other way around considering this single preceded "The Honeythief" by a good three years).  The flip, "Second Hand" is a bit more fleshed out, and incessantly catchy to boot.  Outright great in fact.  From the sound of this wax, Blind Dates had just about everything in their musical arsenal to compete with the likes of Duran and ABC…. though a major recording contract would have probably helped.  You can bone up on the Dates here, and AZ Local blog has a few words to say about the Rhode Island quartet's previous single (though it appears the zshare link is kaput).

A. Radio
B. Second Hand

I would have liked to have heard these songs, but I did like reading about it.

I saw at least one of these singles up on Youtube not too long ago....

Could you re-up this single, please? Thanks. :)