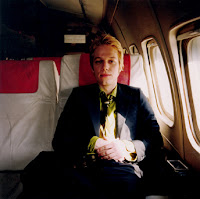 I would really like to say that I was the one that assembled this collection... but afraid it was obtained it via filesharing many years ago from an anonymous trader.  I owe a sincere debt of gratitude to the original compiler, so if you're reading this please leave a comment! From what I'm able to surmise, this "bootleg" of outtakes, alternate versions, and covers hasn't been well circulated, and if any of these particular versions have surfaced elsewhere they've appeared on other boots, not sanctioned releases.  I'm sure there's more than just these ten cuts kicking around in Jason's back pocket that have yet to see the light of day, but what is here is pretty excellent, including the Author Unknown version of what should have been the title track (ironically, "Author Unknown" wound up on his second album, Can You Still Feel?, akin to how Led Zeppelin's "Houses of the Holy" didn't appear on the LP of the same name, rather it's follow-up Physical Graffiti).  Elsewhere, Jason takes to task a relatively obscure Soft Boys song, and a not so obscure Left Banke signature song (though I like the Dickies remake a lot more).  As far as true blue outtakes go, we're treated to the taut, tuneful "To Love a Hero," and the notably more riff rammin' "Behind These Eyes."  In short, if you have any level of appreciation of the man's '90s solo goldmine, you're about to exclaim "Eureka!"

Now your onto something I can relate to. I have the CD, Can You Still Feel with "Author Unknown" track on it. I only paid a couple bucks for it and was relieved how good it is. One of the tracks I like the best is "Eloquence."
Thanks for this review.

So awesome that you posted this. JF is an awesome artist that is incredible to see live too. Let alone so much stuff he touches is genius. I'll enjoy!

Glad I gave you folks something juicy to bite into. I agree, "Eloquence" is great.

i do believe mr falkner himself was the original compiler

Could you please re-up this post? Thank you very much!

I know it's been almost 8 years, but is there a way to get a copy of this?? It's nowhere to be found on the internet!! Thank you!