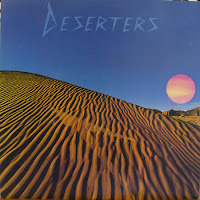 I wouldn't be surprised if this one's been blogged already, but hey it's my rip, and so far as I can tell, woefully out of print.  Starting life out as The Suspects, the Deserters were scooped out by Capitol/EMI Canada in the early '80s, as that label's entry into the wave/power pop sweepstakes.  Commercially, it was a ticket that didn't quite pan out, though it should have been given the trio's approximation of Tommy Tutone and The A's (though the A's hardly hit it big either come to think of it).  At any rate, that general vibe was firmly in place on this debut.  I also give them kudos for pre-dating Thomas Dolby's pedestrian sci-fi motifs, at least by a year or two anyway.  Deserters is actually a rock solid venture, offering some edgy keepers like "No Time for Talking" and "Raining Over France." Elsewhere, "Thought Police" inadvertently name checks a more famous trio they were perhaps drawing a little too much creative inspiration from, at least on that particular track.  These grooves may ring a bit "routine" in hindsight, I certainly don't lay the blame on these guys, what with so many other knock-offs following suit throughout the remainder of the decade.  The Deserters sophomore effort, Siberian Nightlife followed in 1983, and despite some concerted promotional muscle behind it, the group (at that point a quartet) would soon sign off.  The Canadian Pop Encyclopedia (aka Jam/Canoe) has a brief but excellent account of their tenure, that even drops a few hints regarding the Deserters precursor and spinoff projects (speaking of which, you may want to check out Wanka while you're at it).

I have to find this album. I was digging the Thought Police song. Great live video on Youtube.

Thanks for upping The Deserters. "Alien" got some regular airplay on CFNY and the like, and I remember seeing them a couple of times. Though there was a sense that they were jumping on the New Wave bandwagon, the songs are really solid.

I thought I was the only person the dug this record. They have another one too. I really dig "No Time For Talking". I just slapped that cut on a multi CD comp I made for a pal of unheard greats. Thanks for putting this up.

Gee,I remember these guys.Never saw them live or bought the LP.Maybe listening to the album will jog some memories.Thanks.

Just started looking for this long forgotten album. This is the only place I found it and the link is dead. Any chance you can repost?

Completely awesome album from beginning to end. Man, back in the 80's I'd have this blasting out the windows of my Oldsmobile ...... I could scream along with every tune .....would be hard to pick a favorite tune. I haven't heard anything from this album since way back then but snippets of AMERICANS and PROTECTION still dance around in my head. That's how I ended up here .... I was googling the snippets trying to find the name of the band.... I just couldn't recall the name. Would love to find this on disc.

Is the album art supposed to be reminiscent of 'Hemispheres' by Rush? Seems way too similar to not be