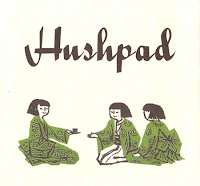 Issued in 1997, but not arriving on my radar until thirteen years after the fact, Hushpad's sophomore 45 (that would be this one) was a pleasant surprise, albeit grossly belated.  I'm still trying to figure out the "pad" quotient of this co-ed Illinois duo's moniker, but the "hush" utterly imbues these two tranquil spins.  "Dear Jenny's" lilting acoustic persuasion recalls Nick Drake's plucked-to-perfection fretwork, by way of Unrest's ballad-esque "Isabel."  "Goodbye Virginia" tinkers with a subtle bossa nova rhythm amidst a motif that's equally as lucid and serene as it's flipside.  In doing my research on Hushpad I learned that they recently made available on Bandcamp an album recorded in 1997, heretofore unreleased, titled For Kites and String, that can be downloaded for a nominal fee.  The a-side to this wax, "Dear Jenny" appears on there, but the remainder of the album features considerably more robust arrangements.  You can acquaint yourself with Hushpad's first single over at Shelflife Records blog.

A. Dear Jenny
B. Goodbye Virginia

Are you having a problem with this particular file or in general?

hey! this is matthew from hushpad. I just saw this. :) thanks for the nice words! we're working on a new record that should be out in spring of this year. here's a link to a new song called evalyn. https://soundcloud.com/hushpad/evalyn

Hi Matthew. Thanks for checking in. Great to hear Hushpad are still making music. Look forward to checking your new songs out. Keep me posted on that new record.

This 7 inch is out of print. Discogs has a few. You can check out new hushpad songs in iTunes.