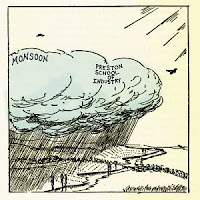 A reader kindly reminded me that in my 2009 entry for two Preston School of Industry eps, I tentatively planned to post the live bonus CD from their 2004 Monsoon album (make that the Australian import version of Monsoon to be exact).  At long last, voila.  PSoI's main claim to fame was the inclusion of Pavement guitarist "Spiral Stairs" (aka Scott Kannberg) in their lineup.  This 2002 set (apparently an audience tape with audio quality that falls just short of a soundboard recording) was tracked while the band was touring behind their debut, All This Sounds Gas.  Not surprisingly, no songs from the ensuing Monsoon LP made it to the set list, however I did find it a bit odd that ATSG's highlight of highlights "Whalebones" is notably absent.  Spiral and Co. at least compensate with the equally melodic "Falling Away," plus they even toss in "Western Homes," one of his contributions to Pavement's Wowee Zowee record.  Overall a nice set if you were moved by the first Preston album.

I actually lie the two songs I heard from this band. Thanks for the review.