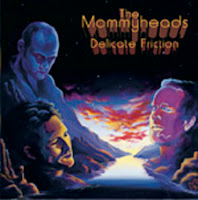 When I was compiling my write up for two Mommyheads reissues this spring (the retrospective Finest Specimens, and an expanded version of their 1994 fan favorite, Flying Suit) I was completely ignorant to the fact that they were recording a new record, their second since their 2008 (or thereabouts) reunion.  Up until those reissues I had nothing invested in the Mommyheads, but encountering their back catalog revealed that yours truly overlooked a veritable indie pop treasure for the better part of two decades.  Frankly, I found myself posing the rather obvious question, "Where had 'mommy' been all these years?"

The 'Heads struck their creative peak mid-90s, boasting lucid, uncluttered sonic motifs with a measured dollop of quirky panache, a la contemporaries the Sugarplastic, and predating what the Shins would be bringing down the pike in a few years to come.  Delicate to a fault the, Mommyheads in the Twenty-first Century are an even cleaner and leaner trio of pop troubadours than past endeavors suggested.  Delicate Friction is still very much the brainchild of the Mommyheads of yore, with an emphasis steeped in the casual ebb and flow of Turin Brakes, thirty-something Sloan, and the more ballad-esque persuasions of Fountains of Wayne.  In short, the boys are maturing and mellowing out just like the rest of us, and even if you're a longtime fan there's nothing to be alarmed about.  The trick will be whether the Mommyheads can lure in a few new sets of ears that have a taste for their ever-increasing refinement.  Three live tracks are bonus-sized, including "Saints Preserve Us" from their aforementioned Flying Suit album.  Delicate Friction is available now from Dromedary Records.
Posted by spavid at 6:51 PM

The Mommyheads are one of the finest live bands I have ever seen. It is not possible to capture their full glory on any medium. You really have to see them to feel it. And knowing their songs makes the experience that much better. Imagine having a non-indulgent jam band, who are tight and geniuses practically all to yourselves. Their sonic explorations are never over the top ludicrous. They disassemble their tunes and repackage them in brief, inspired bursts. That gives you an idea of what it is like to see them live in a little club. And luckily, they will probably be playing little clubs, at least for awhile.

It was a brief overview but it was really well explained in here, actually I'd like you to post in the next post something related tocialis online because that's perfect.