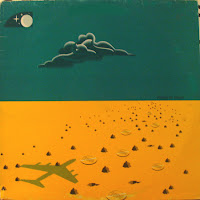 For all intents and purposes, Belfast native Gary McKendry was Papa Sprain, a little known post-pretty-much-everything combo that were taken under the wing of AR Kane's H.ark! Records imprint.  Bubblegum Cage III and Blackened Air blogs had written Papa Sprain up fairly thoroughly in 2009, so this entry isn't going to serve as much of a primer considering most of the legwork has been done, surely by more capable hands then my own.  Came across this one in the used bin at Other Music last year and was struck by the sleeve and doubly more so by the songs it encased.  Since a convenient catch-all description won't suffice for a record bearing such disparate textures and flavors I decided to break Flying to Vegas down track by track below.  Not a huge task given there's only four.  The two blogs linked above are worth visiting, especially Blackened Air which is hosting some other Papa Sprain recordings, including a clutch of demos that are even more enticing than this ep.  All files shared herein were culled from my own rip.

1. "Flying to Vegas" - Our flight kicks off with three minutes+ of quasi-rapped vocals atop sweet, chiming Cocteau Twins guitar.  An offbeat amalgam that actually flows quite well.
2. "Fizz" - A noise-endowed, yet somewhat non-descript stab at what some might liken to "ambient" or "post-rock."  Less than crucial.
3. "Spout" - A dark, foreboding hinterland where icy fret squalls bump up against sheets of sinewy feedback.  A two way tie with "Vegas" as my favorite moment on this record.
4. "Rich" - We come in for a smooth landing, converging with steady finger snaps and an assortment of ancillary effects, propelled by a mild, bass-laden rhythm track.

Flying To Vegas appeared in the UK "Volumes" series. It is, along with Chapterhouses' "Mesmerise", my favourite track from that time combining ethereal guitar with post acid-house synth. A truely ace track.

My copy of this E.P. also judders at the beginning of each side. It was probably a defect in the whole pressing.
In other news, I just finally scored a vinyl copy of May. Thanks Internet!

Hi,
I just discovered this band and the H. ark! label, any chance of a re-up of this cool obscure EP?
thanks!