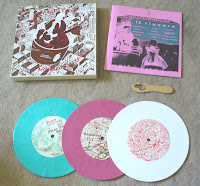 It's 4th of July weekend folks - so what will it be, one scoop?  No?  Ok, how does a double dollop sound?  Still not enough to satisfy that ravenous craving?  Why don't we up the ante to twelve scoops?  There, that's more like it.  Only thing is, this box of "Neapolitan delights" isn't ice cream, rather a snazzy, triple 7" box set compilation, assembled by Simple Machine Records some nineteen years ago.  The Neapolitan theme resonates throughout the packaging in a big way, with vanilla, strawberry, and pistachio coloured wax, each representing one of the three cities of origin (Washington D.C., Richmond, VA, and Baltimore respectively) of Neapolitan Metropolitan's contributing acts.  Heck, they even toss in one of those wooden, mini paddle spoons that are given with those invariably undersized servings of ice cream in dinky plastic cups.  Ah...ain't it just the life?

And then there are the tunes.  A veritable mixed bag if there ever was one.  Roughly half of Neapolitan is fairly expendable, and while I could riff on the bad and the ugly, I'm instead going to hone in on what selections I deem to be praiseworthy, starting with Richmond's Fudge, whose "Montpelier Train Station" I've actually shared previously, alongside the group's crucial trio of early 7" records.  Also on the 'gazer tip, we have the venerable Lily's, who contribute the rich, melodically vibrant "Claire Hates Me," a woozy pop gem that would later appear on their debut, In the Presence of Nothing.  Whorl I wasn't familiar with until I encountered them on here, offering a nicely manicured post-punk maelstrom with some apparent nods to Killing Joke.  I was never one to paint Bratmobile into the riot grrrl corner, but a lot of other people were insistent on doing so.  "She Said" is downright twee compared to Bikini Kill and the like.  Nice tune.  The Jenny Toomey fronted Slack was the precursor band to her subsequently far move visible project, Tsunami, and judging by the sound of "Word Traffic," the apple that would soon drop didn't fall far from Slack's metaphorical tree.  Coral and Candy Machine deliver our daily dose of guitar-wrangling dissonance, quite gleefully I might add.  Last, but not least we have Late!.  Many longtime aficionados of Dave Grohl know that between his tenure in Scream and the Foo Fighters, Nirvana wasn't his only endeavor - not technically anyway.  In 1990 and '91, he cut ten demos in Arlington, that happened to be in a very similar mold of his soon-to-be meal ticket.  The songs were eventually issued on a Simple Machines cassette only release, Pocketwatch, which you can read plenty about by selecting the hyperlink.  The song that appears here, "There's That Song" also materialized on Pocketwatch under the title "Petrol C.B."

I had the opportunity to buy this or buy the Working Holiday complete collection. I bought the WH instead, because it was 40 bucks, as opposed to this, which was 75. I was much surprised, then, to find that when I opened up the WH box, it had not only the series, but also the complete Simple Machines series, but also the split 7" christmas record Tsunami did with Velocity Girl! Apparently they didn't realize those were in there when they sold it!

Damn, sounds like you really lucked out. I wonder if the Late! song was what pushed the price of the box to $75. Didn't realize it was worth that much (at this point, probably not).

Well, I've seen the box set go from 50 to 100 bucks, presumably due to its limited pressing and its unique packaging. I wouldn't be surprised if that did push up the value.

I don't know if either of you would be as so kind to furnish full scans for any of these would you? Trying to archive scans of as much Simple Machines stuff as possible here: http://www.flickr.com/photos/mogwaione/collections/72157623620127102/

It's all a work in progress and I'm far from finished. I have a bunch of Simple Machines stuff I just haven't gotten to yet but I'm making good progress on the Slumberland stuff. I'm hoping to have full visual archives at some point for both.

Thanks for sharing out this content it are really fastidious.

Any chance of re-posting the Fudge singles? Thanks in advance!

reup please mate! Many thanks !!