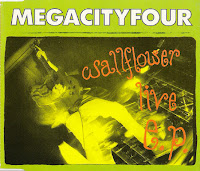 Recently had a request for these, and being the Mega City Four obsessive that I am, I'm more than willing to oblige.  Come to think of it, I'm surprised this is only the second time since I've been blogging that I've dedicated some space to MC4, a British, pop-punk phenom, who gestated in the late '80s, and peaked in popularity in the decade to follow, at least on their side of the pond anyway.  They had an incredibly insightful wordsmith in Darren "Wiz" Brown (fairly recently deceased, sad to say) who doled out melody after visceral melody, as if there were no tomorrow.  Five proper albums, and at least three times that many singles were churned out in their ten-year lifespan.  In the '90s, it was customary for bands to release two-part singles, a ploy used by UK labels to graft their respective bands that much higher up on the sales charts.  Mega City Four weren't immune to such tactics, but for their 1993 single, "Wallflower," instead of padding two cds with non-lp b-sides, the group issued one of the two singles as a four-track live ep.  Smart move, though the studio b-sides on the alternate single were no slouch either. By the time "Superstar" hit the shelves of discriminating UK indie shops, Mega City Four were almost at the end of their rope, with their final album, Soulscraper soon to follow.  I still prefer just about anything off of their Tranzophobia and Magic Bullets albums to this three-cut ep, but somehow MC4 b-sides were often superior to their contemporaries strongest LP material.

Thanks, great stuff! But the link for Superstar is wrong.

Thanks for fulfilling the request in such style (it's good to have another blog on about the MC4 and not just me!)

Will fill the link later today. Sorry folks, Slapped this together last night when I was half asleep.

The music is awesome and a treat to hear. Im thankful for the blog giving such music for the taking.
DVD duplication

Get your favourite music cd now. The blog provides all the information you need to know on the music and the latest albums on the charts.
DVD packaging