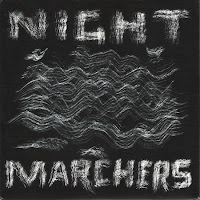 I may have missed the boat on the Night Marchers previous 45s (which from what I understand were just about as scarce as this one, which boasted a meager pressing of 900 copies), but this year I made it to the party on time.  With pleasure I might add, because both of these searing garage-rock salvos outdo just about anything on their 2008 long player, See You in Magic.  For the uninitiated, I should probably offer a little backgrounder on the Marchers.  In fact, their Wiki page lays it out more succinctly than I ever could:

The Night Marchers are an alternative rock band (sic) formed in 2007 in San Diego, California. The band is composed of singer/guitarist John Reis, guitarist Gar Wood, bassist Tommy Kitsos, and drummer Jason Kourkounis. Reis, Wood, and Kourkounis had previously performed together in the Hot Snakes, while Kitsos previously performed with CPC Gangbangs. The Night Marchers' debut album See You in Magic was released in 2008 through Vagrant Records.

There is one rather pertinent detail ommited from the above primer, specfically that prior to Hot Snakes Jon Reis (aka Speedo), fronted the considerably more renown Rocket From the Crypt throughout the '90s and them some.  With Reis front and center on the mic, the Night Marchers function as a far more logical successor to the RFTC throne than did Hot Snakes, but of course most of the vocal duties in the Snakes fell to Rick Forberg (ex-Drive Like Jehu, Pitchfork).  All in all, you might say The Marchers are yet another branch of a truly bitchin' and hopefully ongoing family tree.  It my understanding that this single is sold out.  Yikes.

A. Thar She Blows
B. All Hits

Woo Hoo! I have this excellent piece of wax but no longer have the ability to rip my vinyl... My Ion turntable is a piece of shit. So thank you very much...
Love and appreciate the blog!