Ground Round - Memories Better Left Behind (1997, Quality of Life) 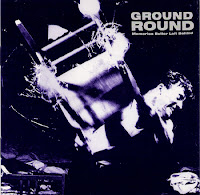 Ground Round were of significant interest to me back when I was ordering $3 singles from ads in Maximum Rock N Roll in the mid-to-latter part of the '90s.  The concept of stuffing a few bills in an envelope or fetching a money order, only to wait a month or longer for my order to materialize seems pretty antiquated.   Nonetheless, it was a ritual I used to partake in on an almost weekly basis, and I was motivated on more than one occasion to order 7"s by this melodi-core trio from Santa Rosa, CA (about an hour north of San Francisco).  Memories Left Behind is the CD version of the 10" ep of the same name, and as a bonus, the aluminum version tacks on ten cuts from earlier singles.   Ground Round were sonically on par with Crimpshrine, Soup, and Unfun-era Jawbreaker.  As far as their subject matter of choice, GR hovered around similar terrain as the aforementioned, venting on relationships and everyman socio-political concerns, though nothing particularly heady.  A "wage-slave," poverty-empathetic motif crops up on a number of songs, which I'm sure were relatable to those in the Bay Area contending with skyrocketing rent costs circa the period these tracks were committed to tape.  Not longer after the release of Memories... Ground Round sold a homemade tape of rarities and live cuts (you guessed it, out of MRR), which I have shelved away somewhere if anyone is interested in me unearthing it.

thank you for posting this... so happy to see ground round finally getting some blog love. they played a show in our living room in south bend, circa '96 or so, and it was awesome. i had all the vinyl, but had to get this cd off ebay (it's not easy to find) to put it on the ipod. yeah... that's how much i dig it.

small point worth noting... the version of dirt+ashes on the cd is different than the 7" version. kinda revamped and pretty cool.

also, gabe still plays in a band called Santiago, which is totally worth checking out.

I'll try to dig that tape up soon. Thanks for the anecdotes Theodore. I can certainly picture Ground Round cranking it out in a basement, but a living room? Must have been a hoot.

thanks so much! my 10" is a bit scratched up

http://ickysteahouse.blogspot.com/ ground round 7 inch and more! and thanks I only had the 7 inch! We played some shows on tour with them!!!

Was wondering if you could provide a fresh link? Thanks!