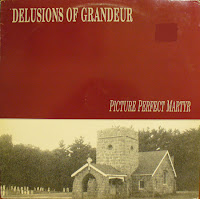 In reference to the title, more like picture perfect pop!  Not unlike jangly Anglophiles the Ocean Blue, who took a chip off the ol' C86 block, made some slight modifications, and pitched it to us Yanks in a more palatable formula, Beantown's Delusions of Grandeur adopted a similar tact, albeit without a modicum of recognition to show for it.  Too bad, because both songs on side one are stunning, with "Silent Sea" clocking in at a perfect ten, and the sweetly chiming "This Theatre Falls" coming in not far behind.  The other side of the coin features the strummy and sobering "From Green to Red," and the much swifter and acoustic-endowed "Carousel."  I'm hearing trace elements of everyone from Winter Hours to Ireland's Power of Dreams, and even a little Crowded House and REM too.  A nice surprise from a combo that sports a decidedly goth appearance on the rear album jacket.  Upon digitizing these tracks, I probably should have taken a little record cleaning solution to this rather staticy wax, but for now, enjoy it as is (I'm pretty confident you will).

Great post...Just the review alone compelled me to buy a nice sealed copy! Thanks.

Glad to hear I enticed you into buying the record. This proves once again that Wilfully Obscure is doing it's part to stimulate the economy.

The vinyl is still around? Might be worth buying a turntable to get better rips. (lp to cassette to mp3 doesn't get you the best quality.)

My friend was friends with the band way back when and that got me into the ep. Even today, This Theater Falls is in high rotation on my ipod.

I still search from time to time, but find little about the band on the 'net. Nice to see one of my old faves on Obscure - thanks!

I can tell you with certainty that this was released in 1989. Was playing it on my college radio show at the time. "From Green To Red" went well with Document era REM. Thanks for posting.

Just for the record, I transfer all vinyl direct to digital, not to a cassette. What you're hearing is record surface noise, not tape hiss. Thanks for providing the date Andy.

Would it be possible to re-upload this album? Been searching for it for awhile now with no luck. Cheers and keep up the great work on the blog!

Piss off! This is the ORIGINAL Dog.