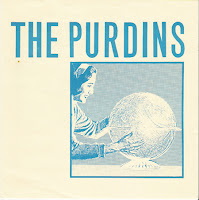 You wouldn't suspect it from the overall tenor of this record, but Seattle's Purdins were the leadoff band on the rather raucous, and almost thoroughly excellent Damned tribute album, Another Damned Seattle Compilation.  In fact, this trio couldn't get arrested for even posing as a punk band on the five originals contained within, nor do they exhibit any of that proverbial Seattle grunge under their collective fingernails.  Instead, the Purdins had a penchant for anti-Nuggets folk-rock, indulging in some saucy jangle here and there.  The slight "Carol Said" and even slighter "Mansfield Grove" recall so many of those utterly obscure '60s bands who released tiny private pressings of records that now fetch four-figures on Ebay...if that means anything to you I suppose.  From some of the fan testimonials I've read regarding these guys, the Purdins music is highly endearing, and more appealing than I'm leading on.  The remainder of their oeuvre is a bit more aggressive (but still approachable) and much of it has been collected on the long out-of-print Greatest Hits CD, which I'll be sharing in the near future.

Funny thing. I played in the Purdins. Not on this 7" or in the beginning. I joined in 1990. I played on about half the songs on Greatest Hits and on the Damned comp. We toured with Built to Spill around '95, because of our friend Doug Martsch. Before BTS, we had a space in Georgetown and the Treepeople practiced in a space below. And, everytime the Meices camed up from SF, we'd play with them both in Seattle and up in Bellingham. Good times. Cc.

Thanks. Awesome of you to chime in C.C. A gig with the Treepeople and Meices sounds like heaven on a handbill to me. BTW, when were the tunes on Greatest Hits recorded? Not much info in the booklet.

Hey Spavid, my best estimate on the recording period for the "Greatest Hits" cd by the Purdins would be between 1988 and 1993. Although some of the stuff Zach worked on alone in the study could be anytime. By the way, thanks for posting the Rain Dogs demo on July 14th. I'm not sure how you garnered a copy of it. We didn't make very many. Yes, I was in the Rain Dogs. We changed our name to the Stragglers and put out another cassette. Then, I moved to Seattle around 1990, or what the guys from Soul Asylum titled "grungy jumping". Made great friends and played with cool bands like Stumpy Joe and Flop. Good times. Thanks again. Christian (grungy jumper).

I still have this 7" and also the Dazziling Bag of Paint Chips 7". I remember that pad in Georgetown - some great parties thrown there. Bumped into Kurt (online) last year - he had some good stories from the earily years. Thanks for the blast from the past.