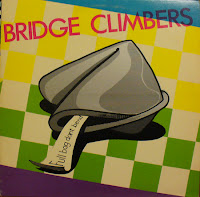 With it's daft yet somehow strangely appealing album jacket, and an esoteric title to match, I couldn't resist taking a chance on this baby.  The Bridge Climbers were at one point going by the slightly lengthier moniker of Dale Lawton & the Bridge Climbers, naturally credited to the helmsman of this Tulsa, OK quartet.  Full Bag... starts things rolling with the reggae-lite tinged "Cameo," affording a little flair to the Climbers otherwise unsuspecting mid-tempo, power-pop/wave type stuff.  "Tightrope," featuring local legend Dwight Twilley on backing vox, strums along in a more conventional stride, as do the even more stunning "Lost and Found" and "Little Girl You."  The rootsy "Let's Rock It" closes this affair out in Rockpile-ish fashion.  Lawton soldiered on into the '00s with a new cabal dubbed the Dale Lawton Stampede, who can be experienced on a thing called YouTube.

Thank you for sharing this.

Been looking for this for ages. All I have is a digital transfer of a cassette copy of the LP dubbed in 1988... but the file is no longer available. Can we get a re-up? If so, thanks!

I have at least 5 non-LP tracks by The Bridge Climbers on cassettes copies from various 7" singles in the mid/late '80s. Aside from my tapes I have no idea how else they can ever be acquired again. Would like to have them in better quality, but...

Any hope of getting "Full Bag Don't Bend" in lossless FLAC instead of 256 MP3? Also, what do the LP labels look like?

Hey Whiskey I have all the vinyl singles of the Bridge Climbers and a few other Oklahoma singles like the Jacks I am getting ready to rip them and save them as wav or flac, and then mp3 to just tote around on my phone, let me know if u are interested, so many great local bands just disappearing...keep them alive.

Link has been updated again.