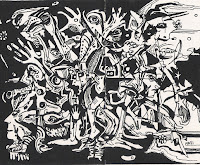 This turned out to be one of my best $1 Ebay finds in quite some time.  Regarded by some to be one of the finest bands to come out of Milwaukee, WI, Wobble Test's discography apparently consisted of merely this cassette and a compilation appearance.  V-Fib Recordings website summarizes up their career better than I ever could:

Three teenagers from New Hampshire meet a boy from Milwaukee and decide to take their high school diplomas to the middle of nowhere to create rock 'n' roll in an absolute vacuum. Sound like a recipe for disaster? Yeah, well, kinda. . . but the tunes, man! Milwaukee's Wobble Test were a full throttle mix of Big Star, Jane's Addiction and The Knack. It's what's parked at the intersection of pop genius, depression, acid, amateur enthusiasm and beer. What The Replacements might have sounded like if they really partied.

In addition to some of the aforementioned comparisons, I'm picking up trace elements of Pure Joy, The Senseless Things, and Soul Asylum (not as if this Brew City quartet had actually been familiarized with those first two).  My only hesitation in sharing trixinickybambibo is that the audio quality of the last two tracks gracing side one (esp "Bells") ironically hold true to the band's moniker, sounding unnaturally wobbly and warbly, most likely the byproduct of an aging cassette.  Architectural Dance Society blog posted a nice write up on the band a few years ago, discussing among other things unreleased Wobble Test recordings (though all audio links are presently broken).

After W/T called it a day, Tim Buckley and John Daniels would later move onto the Blow Pops.

If you tell me that tonight you are retiring this site, then I'm ready to quit and I think it's all a big conspiracy.

P.S. As usual, an interesting post that makes me want to hear it for myself.

Me retiring. Ummm...must be wishful thinking on your part. If you're curious,. don't be afraid to take the plunge. MP3s are pretty harmless.

There must have been at least one more Wobble Test release somewhere along the line (probably a self-released cassette or something). Did you notice the links to Maki, Soda, and Wobble Test albums at the bottom of the Blow Pops page over at Power Pop Criminals? There are 11 different songs on the Wobble Test.

Thanks for adding these to my collection!

Yeah, I discovered the link over at PPC as well. Thanks Johnny!

My favorite band of all time...Only rivaled by Grand Champeen. They had this cassette & a split 7" (I'm not sure about the compilation track you mentioned). They had a very low-fi demo before this & 2 more cassette that they handed out to friends after this. I have it all. Let me know.

Hey Bedazzler. Would love to hear those tapes or whatever else you have. Thanks!

Wow...haven't heard this name since 1990! I saw Wobble Test open for Soul Asylum at Milwaukee's Shank Hall when SA were working the bugs outta their "And The Horse they Rode In On" record. Wobble Test impressed the hell outta me but I never heard of them again after that night. Thanks for this! And if a better copy comes along I'd love a chance to grab it. :)

And before they were "Wobble Test", they were "the Five O'clock heroes"!

Hello. Great site and thanks for writing about WobbleTest & posting their cassette! It's awesome to hear their sound after so many years.

I can shed a little light on the compilation mentioned above:

In the early 90s I was in a band called dog-swing from Detroit that had the good fortune of playing with WobbleTest one night at the Unicorn in Milwaukee. (One of our pals had a friend who knew one of the WobbleTest guys, I believe.) Anyway, we struck up a friendship with WobbleTest, and later they came to play with us in Detroit.

I also ran a little record label with a friend out of Ann Arbor called Uprising Records. WobbleTest agreed to be on the first of three 7" compilations we released. It was called Resist and also included cuts by The Nervobeats (Detroit), Crankpin (Muncie), and The Glenrustles (Minneapolis).

One interesting note, I recall thinking how WobbleTest had a much harder edged sound live than they did recorded. Either way - good music and good times!

Here's a link to pics of the the Resist 7" Comp.
https://www.dropbox.com/sh/0qg7j0mpxtwyazv/sdsoDs0QXD

WOW!..google the name of a band you used to be in and you get all kinds of nice comments from strangers!...Thanks to all who listened from far and wide...and anybody still listening, I have some more gems from our late period, right before Wobble test broke up..

Hey Michael. Thanks for checking in. A guy named Dan set me up with pretty much everything else Wobble Test did. I have several demos, "Tea Town," etc. Fine stuff. When did Wobble Test break up btw?