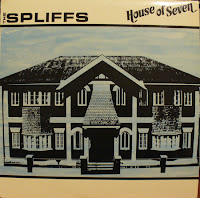 It's with utmost pleasure and beaming pride that I present to you a record that has eluded me for about...oh, say, two years or so, but it's been a damn loooooong two years.  And almost immediately upon being enlightened of this Queensland, Australia quintet, I also learned that The Spliffs were the province of collector-scum record vendors on Ebay and Gemm.com - and very few of them at that.  It's a damn shame these jangle-wranglers from the Northeast quadrant of Oz didn't break out beyond the handful of local indie labels that would have them during their 1985-88 run.

It only took two Spliffs songs to win me over as a posthumous, albeit lifelong convert: "Merry Go Round" from this album, which I initially caught wind of via a fanzine comp CD, Off The Hip 4, and "You Know What They'll Say" from the band's debut single, posted on the now defunct littlehits.com blog.  Admittedly, "Merry Go Round" rings a little precious, at least sonically, but with lines like:  "Mary go round, talk to the boys/Take another ride on the merry-go-round/When Mary goes round they treat her like a toy," the sentiments raised may not be as innocuous as they seem.  Hmmm.  A Ricken-pop classic, as are "4 Seasons" and the memorable leadoff cut, "Never Say Goodbye," which would later make it onto a single, also released by Revolution Records.  House of Seven isn't quite the unremitting jangle pleasure-palace that I had pined and anticipated to frolic in, with more than a few selections applying a more mature singer/songwriter tact, sounding not far removed from what Crowded House were doling out due-south in New Zealand.  The only clunker in the bunch is "(I Work For) K.A.O.S.," a cheesy, sax-laden ditty celebrating Get Smart that's frivolously out of character with it's nine accompanying "bona-fide" songs.  Regardless, this album is a major and phenomenal find.

I would be remiss if I failed to point out that Twilightzone! blog did an entry on House of Seven in late 2009, however this rip is straight from my recently purchased copy, ripped at 320 kbps (for a change)!  You can also check out the Spliffs "You Know What They'll Say" 45 over at Sons of the Dolls.  Enjoy.

Dead Poet Society of One said...

Great LP - Great Band; thanks for the rip!!

I'm listening to this, thinking it is really great and then this Maxwell Smart song comes on that I know I have heard before.

Looking at text more closely (as teachers would advise) I see that Twilight Zone also had this earlier. Ah-ha.

Thanks for the new rip.

This is one of the seemingly endless bunch of great REM-inspired bands. BUT this is also one of the best of the bunch.

I enjoyed playing drums on the album..they were very talented song writers. yes KAOS was always the odd one but the crowd loved. The ABC Australia did make video of Once Again..though never seen it myself. glad you all enjoyed...who wants the Tshirt...LOL

i enjoyed playing drums for them for the album they were very talented song writers..yes KAOS was not album friendly but it was live fav..and we lived the live stage. Theres a very rare video clip the ABC Australia did for Once Again..never saw it myself though if u enjoyed the album and other clips u will like this song.anyone for the T shirt..LOL

Thank you, a million times, thank you. You have put an end to my 20 year search. My life is complete

Hello , is there any chance for a re-up ? It would be much appreciated .

Just wonderful. Saw these guys many many times. Bass player John Watson is now the Godfather of Australian Music (http://elevenmusic.com/about). You can still see the house on the album cover - just street view from Google Maps at 3 Wickham Street, Townsville City, Queensland, Australia

Can you reup this please?

Hi Spavid,
Please could reupload this album?
Thanks,
buckeye