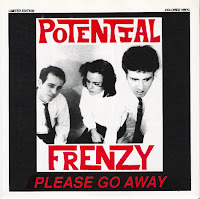 For a little while in the '90s, Mickey Mouse and the gang down at Dizz Knee Land had to share the same home turf as this Orlando trio, who took a few choice stabs at the rotting corpse of punk rock (soon to be revived by a plethora of mega-bucks major labels shortly after this single was released, but I digress).  Potential Frenzy's Norah Salmon grabs the mic for the saucy and mildy anthemic "Please Go Away," a taut power chord-addled ditty that's approximately three parts The Muffs and one part L7.  Sweet stuff.  Bassist John Saylors takes over on "Airwaves (Paid Off)" which clearly bemoans the homogenization of FM radio playlists years before Clear Channel went on their monopolistic feeding frenzy later in the decade.  PF's Discogs.com bio reads as follows:

This was the first Potential Frenzy project with the original line up. This was and is a true DYI project. Potential Frenzy was a pure pop punk band from Orlando Fla with roots from Boston and Washington. Drums Peter Oldrid Bass & Vocals John Saylors and Guitar and Vocals Norah Salmon. Please Go Away the A side was later redone on the first cd Potential Frenzy which won a Jammy Award in 1994. Potential Frenzy played with the Ramones, Buzzcocks, Seven Mary Three, Tabithas Secret. Seven Seconds, Nicoteen, Screaming Iquanas of Love, Gold Finger, Soul Asylum, Monday Mornings ,Joe PoPP and many more. This 45 is a Jem if you can somehow get do so. The band only made 500 copies 400 in the red sleeve and 100 in the blue sleeve.

Per Amazon, it appears Potential Frenzy issued a CD as well.  Another commentary on the band is available at your leisure over at Killed By Florida blog, and directly below you can fix your gaze on a lively Frenzy covering the Clash's "White Riot."

A. Please Go Away
B. Airwaves (Paid Off)

Wow. I don't know what else I can say. Definitely one of my favorite Orlando bands. This band had some fun music, the full length is just as good. I still have my cassette of it. This single comes highly recommended. "Please Go Away"..... such a good song.

I loved this band. they were the
2nd band that i managed in my early early days of rock promotion. fun shows, fun mini-tours in the van. good times.

I appreciate the imput. Glad to see P/F had a following. Will check out that album sometime soon.

Theonecalledcaroline said...
This comment has been removed by the author.
September 4, 2013 at 3:16 PM

reup please this one