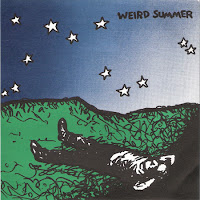 Urbana, IL's Weird Summer featured the talents of Nick Rudd (Velvet Crush, Turning Curious, Blown and Lonely Trailer among others) and singer Bob Kimbell.  The band intermittently recorded four albums during the late '80s through the '90s that were met with critical acclaim, though minimal fanfare, at least nationally.  A real shame if you ask me, because they had the "new south" aesthetic down pat, merging jangly pop with a sprinkling of roots rock vigor.  For my money, their first two albums Cry for the Moon and Homer (reissued as one CD) were near-genius, left of the dial jewels, but the single I'm featuring here came down the pike a little later, as a precursor to their 1998 I.S.O. (In Search Of) album.  The b-side "The Things I Do," is exclusive to this wax.  The aforementioned Weird Summer albums are still available from their label of issue, Parasol, as are a myriad of Nick Rudd related titles.

A. Rained Like Hell
B. The Things I Do

Thanks! Wasn't expecting Weird Summer I didn't even have already.

Isn't there a song called "Weird Summer"? I seem to recall it from some blog power pop comp. Very good song.

"Weird Summer" was a song by Velvet Crush, apparently written after the inception of the band in question.

Bobby Kimbell is a fantastic singer and writer!

The VC tune was inspired by the band

New to me. Good stuff. Thanks for posting.