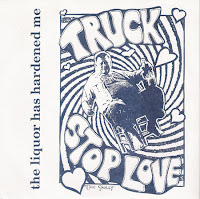 When I shared Truck Stop Love's How I Spent My Summer Vacation album a few months ago, I inquired what else the Manhattan, KS outfit had in their arsenal.  Guitarist/mouthpiece Rich Yarges was kind enough to answer the call, and one of the items he mentioned happened to be this very single, which I recently unearthed.  Having admittedly anointed the Minneapolis trifecta of Soul Asylum, The Replacements, and Husker Du as role models, TSL return the favor on the positively crankin' "The Liquor Has Hardened Me." "Stagnation" pulls in the reins a notch, suggesting that No Depression stalwarts Uncle Tupelo had made a dent in TSL's collective psyche.  You simply cannot go wrong here ladies and gentlemen.  BTW, could anyone inform me of the release date?  This record would appear to have been self-financed, as there appears to be no label affiliation whatsoever.

A. Stagnation
B. The Liquor Has Hardened Me

I don't why this guy from the band couldn't tell you when it came out. That was very withholding of him.

Seems like it was January 1993. Based solely on cursory searches though.

I did in fact state when this was released. It was a bonus item given away when you purchased our first EP. Which was September of 1993. Reread the Summer Vacation post comments Bryan.
Rich Yarges

Didn't look there Rich. Thanks for pointing it out. No hard feelings!