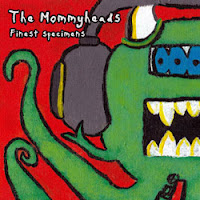 During their tenure in the mid 90s, The Mommyheads moniker popped up in a variety of places - compilations, fanzine reviews, and even concert handbills from far away places.  Despite the fact that this San Fran by way of New York crew intermittently made it onto my radar throughout the Clinton-era, our paths never really crossed, that is until the internets made life a lot more convenient.  Acquainting myself with many of the artists on this blog has been a retroactive endeavor, and the Mommyheads are a case in point.  In fact, around the time I finally started investigating them, I caught wind of the news that two CDs had hit the market, the Finest Specimens career retrospective, and a reissue of their 1994 fan-favorite album, Flying Suit. 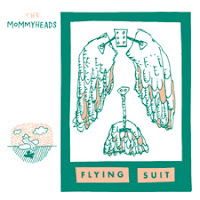 Generally speaking, any given Mommyhead's song isn't inordinately complex, though the decades-spanning Finest Specimens is a challenging collection to dissect, and somewhat pointless to categorize.  Two concurrent threads that stitch Specimen's 21 songs together are the 'Heads penchant for lucid, uncluttered performances and for the most part, conciseness.  Early artifacts (circa 1989) like "Cactus Farm" and "Gravity" show off a jazzy dexterity hinting at the rhythmic aplomb of SST-era Meat Puppets.  A plusher pop awareness would begin to gestate on 1992's Coming Into Beauty LP, represented here by the whimsical "Like a Brick," and "Wedding Day's sonic mosaic of multi-tracked vocals.  It's unclear as to whether the Mommyhead's had serious ambitions of concocting a full blown pop record, but the aforementioned Flying Suit comes close enough, possessing tight, hook-laden and mildly askew gems like "Worm," "Sandman," and "Bottom Out," that weren't too dissimilar to what the Shins and the Sugarplastic had waiting in the wings for us in the coming years.   The reissue of Flying Suit comes tricked out with three bonus cuts, providing exactly 37.5% bonus content.

The Mommyheads went a stretch without recording after 1995's Bingham's Hole, but returned in 2008 with You're Not a Dream.  Finest Specimens features a handful of selections from that platter, and even digs into the well for some live recordings from a variety of eras.  Check out the Mommyheads over at Dromedary Records where you can purchase both albums, digitally or otherwise.
Posted by spavid at 5:58 PM

I just heard Mommyheads' "Worm" for the first time and it immediately reminded me of "Poor Skeleton Steps Out" from XTC's Oranges and Lemons album.

Discovering bands like this is why I love your blog. Spavid, could you recommend something, if I tell you my favorite discoveries on your blog so far have been Sugarplastic, Negro Problem, and now Mommyheads. Browsing the archives can be a little bit overwhelming.

Hey, I got this LA Weekly sampler disc from amazon that has some interesting songs on it...the Negro Problem song is from one of their albums, but the Sugarplastic song, "Motorola Rocketship" doesn't seem to be on any other published source. I got it for $.02 plus $3 shipping. I'd post it for you but I don't see an email address I can send the link to...if you want me to send it, drop me an email.
Otherwise, here's the link to the disc on amazon:
http://www.amazon.com/Weekly-Found-Music-Sugarplastic/dp/B002EXLKLO/ref=sr_1_1?ie=UTF8&qid=1303793626&sr=1-1
By the bye, the "Baby Lemonade" song is interesting as well...and you've got to love a band named after a Syd Barrett song.

"The Mommyheads went a stretch without recording after 1995's Bingham's Hole..."

Well, except for the Don Was-produced s/t album they put out on DGC records in 1997. It's kind of nice to hear them record with a proper budget, although the end result for the most part sounds like They Might Be Giants meets Michael Penn.