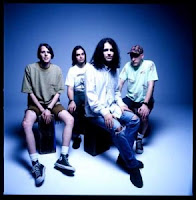 Welcome to the third installment of the seven volume, Posies Broadcasts collection, a fan-curated assemblage of the group's on-air radio performances and FM concert simulcasts, which were surprisingly plentiful and well archived.   As I mentioned in my initial Posies onslaught two weeks ago, most of these sessions came to pass when Auer, Stringfellow and Co. were pushing their Frosting on the Beater and Amazing Disgrace albums.  This set is no exception, consisting primarily of two sterling sets for Amsterdam's 2 Meter Sessions, one from late '93, and then a 1996 follow-up for Amazing Disgrace.  The '93 Frosting-era session contains a few tongue-in-cheek, impromptu covers of Teenage Fanclub and Deep Purple tunes among others.  The session notes (included in the folder) mention that two songs from the original '93 broadcast ("Dreaming" and "Burn and Shine") were omitted due to inclusion on the At Least, At Last box set, and a 2 Meter compilation CD respectively.

Excellent Stuff. Keep up the good work. Did you mention you had a Tina Age 13 single in one of your comments following on from the Goldenrod supermix compilation? Please could you post it when you get a chance. Cheers.

this is the best one yet. I especially like the between-song jams! Thanks again.

Glad you're liking these. As for TA13, I don't have a single by them, just a cd ep that I'll try to get up soon.

The link is no longer working. Can you please re-upload? Thanks!!

I'm so glad to find all these great Posies recordings. Would it be possible to get the 3rd disc reuploaded please? Thanks so much!

Excellent blog !!! I'm glad to find all this great stuff over the internet. Thanks so much.

When you have time, it will be great of you to reupload the 3rd broadcast.

hi,excellent blog. i wish i had the time to read it all. you have been to some really cool shows.i have a trading list of the same type of music you like,lots of shows and demos of old grunge/indie bands etc (some shows i went to i recorded myself so no one else has them yet. i have recorded the posies,melvins,j mascis,mudhoney etc) fancy a trade?emamil me at livedeathlive@yahoo.com if not, would you be able to re up load the posies shows as they have been removed!!!