Senator Flux - Bake the Candle in the Hall of Her Brain ep (1990, Emergo/Insight) 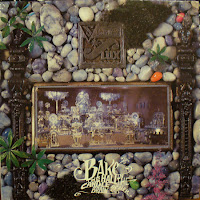 Senator Flux aren't the first band name to roll off most peoples tongues when reminiscing about bygone indie acts from the metro D.C. area, but the group's low profile belied a remarkable amount of talent, much of which residing in mouthpiece and six-string slinger Jeff Turner.  Jeff (whose name has alternately been spelled as Geoff) made a name for himself in two smokin' D.C. post-hardcore outfits, 3 and Gray Matter, but his erudite songwriting and philosophical musings truly came to the fore in Senator Flux, who churned out a quartet of quintessentially left-of-the-dial albums during the late '80s and early '90s.  I featured the latter two of those melodic marvels, 1990's Criminal Special and it's just as necessary follow-up Storyknife, quite awhile back (the links are still active).  You can start there, but this ep would be just as an ideal place to make your acquaintance, as side one features two songs from the the then to-be-released Criminal Special.  Flip the coin and there are two even fresher songs, 8-track demos of "Universal Solvent" and "Monuments," both of which would make the grade for Storyknife in 1991.  The variances between these so called demos and the finished product are downright slight, but sure to tickle the fancy of you half-dozen or so Senator Flux completists, and as previously mentioned, make a damn fine introduction.

I just found this in the dollar bin at Mississippi Records. Great stuff.

Haha. As if. We completists own the vinyl!

Sounds like Mississippi Records is my kind of store.

Wish I could get my hands on more S/F demos...

You could maybe ask Mr. Levine,,,:

Thanks a lot for posting this!!