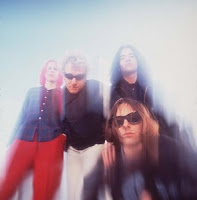 Four down, three to go.  As with previous installments, the period these live performances were largely derived from was 1993's Frosting On the Beater album and shortly thereafter.  The centerpiece of Broadcasts Vol. 4 is a radio dispatch of a Toronto 1995 Posies gig at Lee's Palace, most likely aired on CFNY 102.1 (please see the source notes in the folder for more details).  This particular show featured previews of several songs that would comprise the band's third major label outing, Amazing Disgrace.  Another treat is an acoustic set cut for Radio Paris in November of '93 that kicks off with a sublime reading of "Any Other Way," which of course appeared on the equally sublime and transporting Dear 23 album.  Broadcasts 4 puts things to bed with another stripped down radio session, this time for Amsterdam's DeBeurs Radio in 1998, featuring in-studio takes of "Friendship of the Future" and "Start a Life," both found on the Posies oft overlooked and prematurely touted "farewell album," Success (but that cover really could have used some improvement, eh?).  The fidelity here is by and large on par with Broadcasts 1-3, though there is a little over-modulation in places, per the source notes.  Hope ya like.