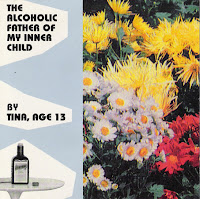 Another request fulfilled.  Tina, Age 13 were one of many '90s outfits I discovered posthumously in dollar bins.  They initially showed up on these pages via their appearance on the Goldenrod Records Super Mixer compilation.  It was pointed out to me by a reader that bassist Chris Johanson personally illustrated each and every cover of Tina's Good Feelings album, which is nearly impossible to come by these days due in no small part to the one-of-a-kind sleeve art.  Johanson would graduate to painting other things, and even had a solid chunk of his handiwork anthologized in this book.

Tina were a noisy and highly chaotic proposition to reckon with, and can partially be likened to a more affable and modest Unwound.   Like Unwound, this trio would tease you with a brief hook, only to recoil mere seconds later, yet still maintain your attention.  The CD version of Alcoholic Father closes out with a 56-minute rampage through Neil Young's iconic (and usually) much appreciated "Cortez the Killer."  In this case, I'm not sure about the appreciation quotient, as the last forty minutes or so is a monotonous loop of white noise and feedback, with a palpable nod and a wink to Metal Machine Music.  I hope ya'll don't mind that I decided to cut the rope right at the fifteen minute mark.  You're not missing a damn thing, trust me.

Hi, any chance to reupload this album? Been searching for this album for a while. Thanks!

hey you think you could re update the link?