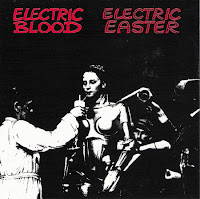 This recording will be of some interest to you if you count yourself as a fan of New Zealand's indie pop godsends The Bats (who by the way are still in business).  While Electric Blood aren't the Bats per se, they were a notable precursor given Robert Scott's involvement.  Scott of course is the mouthpiece for the Bats, and fills the same roll on Electric Easter, trading vocal duties with his brother Andrew Scott on a couple of numbers.

Electric Blood kick started their career in 1977 in Dunedin, NZ.  A number of homegrown cassette albums were released during the '80s, including this one in 1984.  It was reissued ten years later on CD on the small American imprint, Beehive Rebellion.  If the liner notes are to be taken at face value, Electric Easter was knocked off in the span of just one day in April '84, tracked live in a rehearsal room.  Easter is demonstrably tone-deaf, lo-fi noise pop, but proves to be increasingly melodic as it progresses.  Dare I say "Help Me" and “Boot Your Car” are genuinely catchy?  No out-and-out revelations here, but there's nothing to dissuade fans of the Bats or for that matter, Kiwi rock aficionados in general.

Thanks for sharing this! I'm a big fan of The Bats and had no idea that Electric Blood had even existed at one time.

I wish Robert Scott was more well-known in the 'States and elsewhere because he's an incredibly gifted musician and knows how to write great hooks. Album after album, there are so many amazing songs by The Bats.

Do you happen to know if Robert's brother Andrew was musically active following Electric Blood?

I'm the one who reissued this on CD. There was going to be a second reissue, titled "The Man Who Tasted Shapes" (Robert's title), that paired the Electric Blood tapes "Acoustic Splendour" and "Actual Stuff," but I ran out of money and energy. It's too bad, because I think "Acoustic Splendour" is the best Electric Easter album. It's up there with the earliest Bats in my opinion.

Hey. Thanks to both of you for commenting. I don't really know what Andrew pursued after Electric Blood.

Greg, I hope you don't mind me sharing this CD. Chances are I mailordered this from you many years ago. Would love to hear the 'Acoustic Splendour' stuff at some point. Cheers.

Heya, I know this post is old, but I came across it through a Google search of Electric Blood. My husband and I just released a 7" EP with four Electric Blood tracks. Here's the info and such: http://spacecaserecords.com/Mailorder/Electric-Blood---Single-2011.html