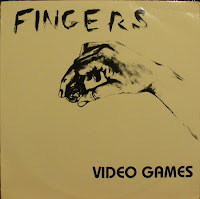 Power pop!  Now this was a worthwhile purchase.  Came across Video Games on Ebay a few months back and snatched it up sound unheard, instead putting total faith in the seller's comparisons to Shoes and another band or two from the same era.  Shoes they ain't, but the Fingers gesture their furthermost extremities in the direction of 20/20, Off Broadway, The Bats (US), and dare I even suggest Rick Springfield?   At any rate, I'm certainly impressed, and like any band worth it's salt. they save their most potent number for the grand finale.  "I Wanna Be Like You" exhibits an irresistible punky thrust that naggingly recalls the Knack's "Good Girls Don't."  There are a handful of Fingers videos on YouTube, one of which I've pasted below.  An utter and unmistakable product of it's era.  Guitarist Dave Medford has evidently departed this mortal coil.

Posts like this are why I still read this blog. Fantastic.

i remember this song! my college radio station used to play it back in the 1990s. it was kind of a 'novelty' hit, ya know? problem was, people would hear it, come into my record store and want it--but what could i say? we didn't have it, nor did we know anything really about it, other than the radio station played it.

I'd heard of this, but never heard it. Thanks.

Could please re-post Thank you very much

I was the second engineer on this album. I was a staff engineer at One Step Up back then. Had a great time working with these guys and John Rollo. It really takes me back.