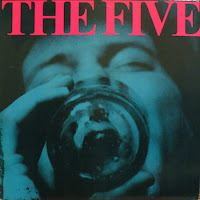 Not sure what you're going to make of this one, but thought it was worth a shot.  Hatched in the Pittsburgh punk scene in the early '80s, The Five (who are actually a quartet) moved to points eastward in 1984, namely Boston.  Makes me wonder if they would have opted for Seattle if it was six years later, but I digress.  Helmed by Reid Paley, the band's bluesy, demi-punk formula vaguely lent itself to the rockabilly contingent, but furthermore offered some noir overtones a la TSOL.  If you can get past Paley's gruff set of pipes (think two parts Fear's Lee Ving, one part Jello Biafra, and a smidgen of Glenn Danzig), The Five might hold some promise, and perhaps even a little delight for you.  Problem is for every song that cranks it's way down the right track (say "No Regrets" or "Cut Me Loose") there's a painfully unappealing tune that will have you racing for your iPod's jog dial.  It appears the band still has some sealed copies of the record for purchase, so I'll probably remove the link in the near future.

Wow - I've been looking for anybody who even remembers The Five for years. I am totally impressed that you have this entry on your amazing blog. Thank you. I will no longer have to try to resurrect and listen to my hundreds of old (and decaying) cassette tapes of hours of recorded 80's Boston college radio for a few select songs by The Five. I do remember having a great live-set recording that I believe they did on WMBR. I also remember seeing them a number of times live, including one phenomenal night at The Rat. Thanks again for this!