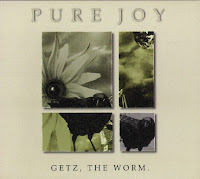 To most people, the name Rusty Willoughby will probably yield nothing more than a big fat question mark above his/her head, and at this point it's bound to stay that way.  As for myself and a small but dedicated fanbase, the very mention of Rusty conjures up two more names: Pure Joy and Flop, two consistently satisfying Seattle bands he played the starring role in, the first intermittently during the '80s and '90s, and the latter primarily in the first half of the '90s.  My most recent Rusty Willoughby post involved Flop's 7" singles, which collected together comprised some fourteen, crunchy n' catchy-as-all-get out punk-pop salvos the likes of which their mainstream contemporaries would have quite the axe to grind to equal.

Step back a few years to 1989, i.e. Flop's pre-gestation period, when Rusty occupied his time with the aforementioned Pure Joy who had just dropped their first proper album, Carnivore.   Promising as that platter and a preceding ep were, Pure Joy would soon be put to pasture making way for the considerably more visible Flop, who by 1993 scored a (short lived) major label contract via Sony.  It wasn't meant to be, and after a return to their former indie home of Frontier Records, and the 1995 parting shot, World of Today, Rusty would soon rekindle Pure Joy, only this time the buzz that had greeted Carnivore wasn't quite as tangible for it's belated follow-up, Getz the Worm.  For shame, because the record in question (technically PJ's third album considering the release of their pre-Carnivore venture, Unsung) expanded on the group's pummeling power pop of yore by incorporating a slightly looser delivery system a la Built to Spill, which lent itself well to Rusty's wry and occasionally surreal prose, not to mention a singular sense of wit and lackadaisical timbre.  Getz is something of an acquired taste, but if you have the patience (and preferably some familiarity with Pure Joy/Flop's previous material) it's more than worth acquiring.  A fourth PJ album, Gelatin and Bright would make it to market in 2003, and Rusty has occasionally released solo material, most recently 2009's Cobirds Unite.