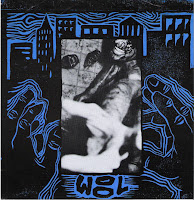 With an amped-out synthesis of punk, grunge, and some tasteful alt-metal maneuvers, Wool struck an immediate and eminently powerful blow to this set of eardrums.  Their 1992 Budspawn ep was a a fixture in my car's tape deck for many months, yet at the time I was unaware of the quartet's back story.  Remember Scream, the D.C. hardcore band that Kurt Cobain and Krist Novoselic usurped Dave Grohl from just in time to record Nevermind?   It turns out that the nuclei of Scream, mouthpiece Peter Stahl and axe-wielding brother Franz Stahl transplanted themselves to L.A. in the early '90s and laid the building blocks for the decidedly more bludgeoning and righteously heavy Wool.  The aforementioned Budspawn was issued by London Record's boutique imprint External to little fanfare, at least in my corner of the world, but prior to which came a pair of singles, Mayday and "Little Darlin'" b/w "Medication." 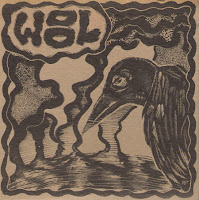 Fast forward to 1994, and the release of Wool's Box Set (which in fact was merely a traditional single disk album).  Despite some occasional stoner-ish meanderings, Box Set was largely cut from the same cloth as the ep, boasting some fairly accessible (i.e. grunge friendly) material including "Kill the Crow," and the walloping, groove-ridden "Superman is Dead." The first of those two cuts was released as a single by Bong Load Records, which included a cover of the Sonic's legendary garage romp "The Witch" as the b-side.  In conjunction with Box Set was a three cut, vinyl-only 7" also on Bong Load, featuring what I would assume to be three session outtakes.  In any event, the album stiffed, Wool folded a year thereafter, and Franz would go onto greater renown after he was enlisted as a Foo Fighter in the mid-90s.  You can fill in the blanks to the rest of Wool's history at the ever resourceful Myspace.

As a bonus, I'm including the b-side to Wool's second 7" single bearing the song "Medication" dubbed "Marky St. James," which isn't a song, rather a prank call concerning an obnoxious metalhead who has designs on forming a new band.  Lots of luck with that.

I was a huge Scream fan and still listen to then now and then.

But I could never warm up to Wool. Maybe this collection will do it for me.

Thanks much for the Rusty Willoughby sides elsewhere here.

Thanks for the blog generally too.

Fantastic! I've wanted these sides digitally for a long time now. I appreciate it!

You wouldn't, by chance, have the live Wool disc that came out in 1995, would you?

No live Scream, but I do have the Wool - Your Choice Live Series disk that I can share in a future upload.

Does anyone else hear Jack Black and Liam Lynch in the Markey St. James bits?

Thank you so much for this! Criminally underrated band and super nice guys the Stahl; brothers are.

can you re-up this please? thanks

Hello, can you re-upload

Thanks for reviving this link!

Thank you for re-upping this link!

Such a bummer that Box Set isn't available to stream anywhere and all of the online download links are dead. The full length is definitely my favorite material by the band but unfortunately I only have the cassette.

I might just bite the bullet and purchase the CD for $1.00 on Amazon!

Reup please ! Link is dead. Many Thanks !