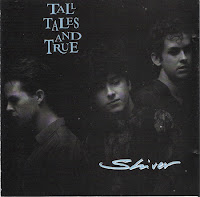 This was a nice thrift store find, even though I had minimal firsthand knowledge of this Aussie trio.  The rooArt logo on the CD tray was enough of a trademark of quality for me to make the purchase.  Tall Tales & True were not exactly analogous to any of their comparatively "cutting edge" home country brethren, but instead pursued roots rock to their hearts content, at least on this tight and potent debut album.  Shiver is seeped in American Midwest aesthetics, without any heavy-handed Americana hokeyness to drag the affair down, and suggests this Sydney bunch's awareness of the Del Fuegos and perhaps even Guadalcanal Diary.  For those of you in the audience acquainted with Dreams So Real, Tales mouthpiece Matthew de la Hunty often bears a resemblance to DSR's Barry Marler, and furthermore the first half of Shiver gives that band's Gloryline album a run for it's money.

Per Ian McFarlane's indispensable Encyclopedia of Australian Rock and Pop, TT&T released a number of eps and singles prior to this album.  If anyone has a line on these, especially their self-titled mini-album on Survival Records, I'm all ears.

rooART is filled with many good alternative rock artists like this group. if you like this one, definitely dig into the labels discography...it's worth the investigating....

What are the chances of getting this and the EPs reupped? I just ran across that first EP, and I am really loving it.