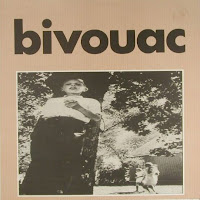 Thanks go out to Duncan who sent me the files for this long forgotten ep.  So forgotten in fact that I hadn't given this British trio a second thought since their 1995 Full Size Boy album landed stateside on Geffen Records...and sadly sank without a trace.  The ABC ep was Bivouac's maiden voyage, but didn't see issue in North America until it's contents were included on the Derby & Joan mini-album released a year or so later on Engine Records.

Bivouac's crankin', guitar-rawk crunchiness nipped at the heels of a pair of notable New England acts of the era, Dinosaur Jr. and Buffalo Tom, but weren't outright derivative.  Had more ears been acquainted with them, these Derby, UK boys would have likely been bullied into the grunge ghetto by mainstream listeners, but not without a fight.  Unfortunately, Bivouac didn't receive enough visibility to enjoy the luxury of being typecast.  Recommended not only if you appreciate their aforementioned US contemporaries, but such like-minded acts from down under as Pollyanna and Screamfeeder.

Def 90s. This was a great band, sadly and inexplicably ignored. Full Size Boy is a must have. Also check out Paul Yeadons post-Bivouac band Wireless Stores, who have at least an EP and a full length out.

Thanks for pointing out the typo.

I just recently heard of Wireless Stores. Will have to give them a listen.

I picked up Full Size Boy out of a cut-out bin way back when and found it more than worth the buck or two I paid for it. Also, I remember that the band's name sent me looking for a dictionary, because it was a word that I'd somehow never encountered before. RS keeps giving me this message:

The file of the above link no longer exists. This could be for several reasons:
* The uploader deleted the file
* The file contained illegal contents and was deleted from our Abuse team
* The file is incorrect
* The file was uploaded through a free Account and reached the maximum number of downloads


Is this a "free Account" error, or is it truly gone forever?

Could be a free account error, as mine is a paid account and the link works for me, but in the event that's it's something random, try it again later. Rapidshare revamped everything on their site, and quite frankly it's a bitch.

But I guess it was a temporary glitch, because the file is available again. Thanks for checking it out.

I remember interviewing the band at CBGB's shortly after they were signed to Geffen. They were very good but seem to vanish like so many bands that were swallowed soon after signing to majors.