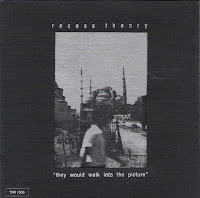 Florida's Recess Theory harken back to an era, not so long ago, when emo was still a basement/VFW hall movement, and moreover, far less derided than it is today.  In short, they got to the party before the mainstream gatecrashed it, and that in itself is reason to be nostalgic about "They Would Walk Into the Picture."  RT logically borrowed a thing or two from such period aggregations as Mineral, Braid, and a host of entries that set up shop under the Caulfield Records banner, if that means anything to you.  They Would Walk... is indeed yearning and endowed with a reasonable amount of angst, but stops well short of the genres all too typical trappings.  It also doesn't hurt that they knew their way around a hook or two.  In addition to this mini album, the band shared a split ep with the considerably more popular Further Seems Forever.  Recess Theory would later reroute their musical course considerably, and carry on as Legends of Rodeo in the 21st century.

thanks for this one, been wanting to hear it again for a while. i miss when you couldn't move for bands that sounded like this, to the point where i took it all for granted.