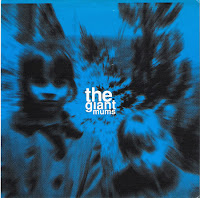 There was no dearth of noisy, indie guitar-rawk talent sprouting up throughout the '90s and New York's Giant Mums were another fine case in point.  Making their live debut at the then intact CBGB's, and having a record (this one to be exact) engineered by the renown Wharton Tiers, you'd think those two pedigrees alone would've helped cultivate a thriving fan base, but making a go of it as a rock band in the Big Apple was as daunting for the Mums as any of their peers.  The "Eyedropper" ep would be followed up by another single, and eventually a full length in 1994 (which I truly need to get my hands on).  You can read more on the Mum's discography over at the lovingly preserved Quixotic Records webpage.  Mucho vinyl static permeates the four songs I'm presenting here, and I'm afraid there's precious little I can do about it, but that hardly impedes the crackling energy exuding from the Mum's who often recall the tuneful, lo-fi sprawl of SST-era Dino Jr and some of Swervedriver's woozier ventures, like Raise.  Their Myspace bio, linked above, mentions some demo tapes that were floating around circa this record, but one has to assume they've long been missing in action.

All good indie rock here, wonder if you might shed some light on other Quixotic bands like Airlines, Swimmer, Halcion and dare I say Kenny Young and the Eggplants. I would love to hear that Giant Mums lp now too that I've finally heard something from this band.
Great posts lately sir.