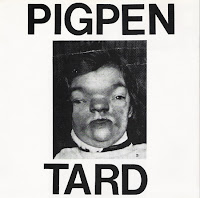 Dare I say this is the most conspicuously tasteless single I've shared to date?  Admittedly, the title track to this three song ep unnecessarily mocks some of the least among us, but if you can get past the rather sophomoric lyrical content you'll discover that New York's Pigpen (later reconfigured as Pig Pen) not only kick it lowbrow, but low-end as well, with ample nods to Flipper and The Melvins.  "Tard" packs an irresistible groove and a wailing guitar solo, while the two flipsides sting with a taught and linear scum-punk pizazz.  As for the depictions of congenital defects that grace the inner sleeve, let's just say they blend in with the territory.  If anyone feels the need to hear their follow-up Prick album I'll consider posting it, but in the meantime you can read this rather spot-on critique.  I should also mention that original copies of this illustrious 45 may still be available from Vital Music.

Hi, any chance you could re-up this, as well as the "prick" cd? I'm always on the lookout for scummy shitty buttholes style noise rock from the 90s. Thank you.

Btw, this record was released in 1991. It features Dave Lindsay (from Ff, a band that's been posted on this blog numerous times) playing bass.