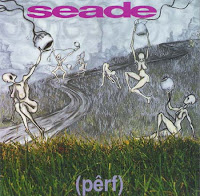 Now this is what I like to call head music for the rest of us.  Baltimore's seade (pronounced "shade") were yet another fantastic Grass Records signee that didn't have a prayer in gaining national prominence.  Too lengthy to be deemed an ep, but just shy of full length status, (perf) commences with "Soulful" a billowy, amped-out piece that finds the band wandering around the sonically expansive troposphere that their often grandiose contemporaries Hum and Failure were wont to inhabit.  seade soon drift back to earth and treat us to a perfect album sides worth of dense, enthralling guitar rock, reminiscent of Swerevedriver, Iowa's underappreciated Head Candy, and to a lesser degree the Doughboys cicra Crush.  Some disparate influences at play here, but trust me, it works brilliantly.  So far as I can tell the only other recorded matter that exists by this long defunct quartet is a 7" for "Kool-Aid Mustache" and some comp tracks, one which you can stream here along with (perf) itself, or you can download the album via the link conveniently provided below.

seade frontman Jack Osiecki died of a sudden asthma attack in 2001 at the tender age of 29.

Awesome. You are on fire lately. Thanks! Anybody have the comp and 7'' stuff?

Yeah this is great. More stuff would be nice.

Its great to see people are diggn my cousin jacks stuff! ! Wow

Soulful is one of my all-time favorite songs. Luckily, I saw them play at Memory Lane whay back when...

In the last year couple of years in Jack's life we were playing together a lot. We were both playing live with the Spin Art band Trampoline (me on guitar, him on bass).
And he was playing lead guitar for my band Cinnamon Toast (on Radiopaque Records).
Jack is the guitar on the right in this song, which we never released on record...
http://grooveshark.com/s/It+Smells+Like+Glass+Eyes+In+Here/35FCEq?src=5

This one is mixed kinda mono, but Jack is the 2nd guitar on this song as well. It was going to be a single, but when he died it took the air out of me and I never put it out.
http://grooveshark.com/s/Never+Be+Together+Tune/35FCUV?src=5

The single is epic! Kool-Aid shows SO much promise.

Jack O was a wonder of true talent. Once I got to know him I was lucky enough to play in a short lived band with him called LUNAR ORBIT RENDEZVOUS (in 1999). We played a few shows but could never find a reliable drummer so ended it w/out recording the 5 songs we'd written..(oh let's not forget the MBV cover). Then, I learned the drums & he asked me to play in a PINK FLOYD tribute show at the OTTOBAR & JACK stole the show and everyone knew it. He looked JUST LIKE Syd Barrett but with dyed blonde hair. I will always remember seeing his head bopping around (from behind my drums) during the weird break in See Emily Play. Nice memory.

Watered eyes is one of the best songs I've ever heard by anybody. I found the CD grass of 96 and I was just blown away. A shame they didn't do more.