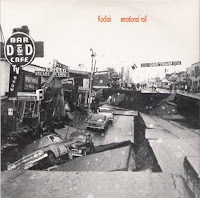 Apparently there are/were a couple of bands named Kodiak making the musical rounds, but I'm pretty confident this Kodiak is extinct.  In addition to this 1998 single, I know a self-titled album was released the same year, on the UK-based One Louder label, and I'm assuming that's the locale this quartet hailed from as well.  Splitting the difference between tense post-hardcore punk and a tuneful indie-rock, I wouldn't be shocked if Kodiak were enlightened by such across-the-pond wonders as Jawbox, and perhaps gazed due northwest to Sweden's Fireside and Norway's Beezewax.  "Emotional Rail" is the keeper, with it's two b-sides exhibiting some gnashing, hair-trigger stops and starts, with plenty of hard-boiled abrasiveness to go around.

A. Emotional Rail
B1. Little Star
B2. Burning Bridges

this band were based around newcastle upon tyne, and were great! didn't last too long, a single or two and one full-length album if i recall correctly. i'll have to dig out my cd.

Kodiak were roy fox vocals, steve malley guitars, antoinette hachler bass and mark walker drums, fox and malley originally forming Crane in Northumberland then Kodiak from the ashes. This single was recorded at Uncle Sams Recording studios as part of the Kodiak album sessions engineered by steve chahley (now back in his native Canada)the sessions were recorded live with minimal overdubs from guitars and vocals.
Thanks Roy Fox