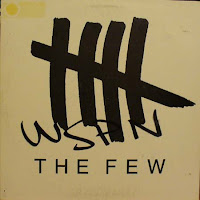 I got suckered into this one by the simple but effective record jacket (albeit marred by the radio station call letters) - that, plus the fact that it was a mere $3 investment.  Got just about my moneys worth.  The Few, presumably based in New York as this is where the label was based and the ep recorded, were a fairly non-descript pop quartet with wave/power pop tendencies, and vocals that recall Neil Finn.  I could do without the horns (courtesy of the Urban Blight Horns) on "Where's the Fire," but "Grownup" and "Romance" have their charms.

ahh yes, I remember buying this a while back and I would say you are dead on with another insightful review...I noted that Romance was the standout here...thanks for the post..

Could you re-up this please? Thanks.