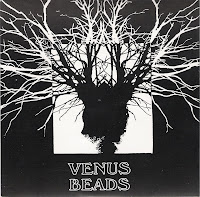 By popular demand I present to you the Venus Beads debut single.  My share of their Black Aspirin and Incision disks touched off multiple requests.  I was reluctant to share it at first, as the audio quality was a bit sub-par.  It was pointed out that I may have mistaken my assumed "worn out" copy of the single for an insufficient recording job on the band's end.  Still can't say for sure, as the side with "Heartless" on it looks a bit scuffed, and there's snaps and crackle aplenty.  If I come across a superior copy I'll be happy to make an upgrade.  If you've enjoyed what I've posted by them thus far I wouldn't let that scare you off.  "Day of Nightmares" is particularly good, recalling early Mega City Four.  They don't make 'em like these anymore...

A1. Day of Nightmares
A2. Heartless

This is really good, will have to check out their albums. It is a shame about the quality though, you're right.

Also a shameless plug, the bsidesrus blog has returned: http://bsidesrus.co.uk/

My guess is it's the recording that accounts for the sound, not the pressing or any surface wear. And since I can only decipher about half of the lyrics of either tune, that might be just the way the band intended it. LOL. Groovy sounds, all the same. I hardly noticed the surface noise, but then I've been collecting and listening to used records since the mid-70's; if I'm really into the music, my mind seems to automatically filter most of that stuff out. Just as long as there aren't any skips, I'm happy. I'm grateful to acquire something like this no matter what the condition, since I may never run across a copy to buy myself. Thanks very much for sharing it.

I have to completely agree with that. I’ve had some friends that have used matchmaking services ..