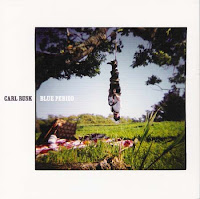 Originating in the mid-80s, a celebrated but little known California trio dubbed The Nashville Ramblers turned more than a few heads with their only publicly issued song, "The Trains" (though let it be known, the band never officially broke up, and have performed live as recently as last year).  That beautiful, revivalist slice of Meresybeat pop initially came out on an obscure British compilation in 1986 that just a scant few were familiar with, however it received greater availability once it resurfaced on Bomp Records 1996 The Roots of Powerpop compilation, as well as the Children of Nuggets box set courtesy of the anthologizers at Rhino Records in 2005.

At the turn of the millennium lead Rambler Carl Rusk issued the winsome, albeit brief solo disk that I'm sharing today.  The ten songs (including a couple of minute long interludes) comprising Blue Period are as one might guess a sizeable progression from the Ramblers jangly jewel, the aforementioned "Trains," though "Grains of Sand" revists that Mersey terrain with retro-fitted inflections of steel guitar.  Elsewhere, "Raspberry Way" wafts it's way into the orbit of the Wondermints, and the stark and spare acoustic ballad "Dance With Me" haunts in much the same manner as the Posies Dear 23 and Big Star's Third/Sister Lovers' more contemplative moments.  Rusk's readings of ELO's AM radio staple "Can't Get It Out of My Head," and Nick Drake's "Fly" dovetail well with his original material.  Just wish there was more where this came from, and I'm sure you Ramblers aficionados would concur with me on that.

Can You reup please?