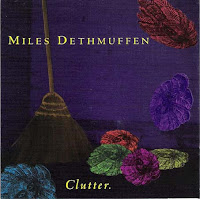 Clutter is the second, and from what I can discern, final album from the Massachusetts quartet known to the world at large as Miles Dethmuffen.  I Shared their Nine-Volt Grape platter last year, which I was fairly enthused about, and though Clutter pales by comparison it's still worth a spin if such likeminded co-ed outfits as Christmas (the band) and Atlantic Records-era Eleventh Dream Day got your juke joint rockin'.  The prose is wordy, and the arrangements mightily robust, just not terribly remarkable...though they were definitely onto something with "Hope I Don't Spend All My Money on Liquor."  Here's what Trouser Press had to opine on Clutter.

The band's long-time-coming sophomore LP, Clutter, however is somewhat of a misstep. While not bad by any stretch, Clutter has a darker demeanor; the once-sprightly sound suffers from John C. Wood's monochromatic rock production. Still, the album features some of the shiniest jewels in the Dethmuffen crown: Linda's anthemic "Loveman, We Love You" and the perky-but-sad "Sleeping Bag" (both dating from '92 Kolderie sessions), as well as Ad's plaintive "Hope I Don't Spend All My Money on Liquor."

Miles changed their name to Permafrost for their final album In Harm's Way.

Two of the members now perform with Ad Frank & The Fast Easy Women, who have released a few albums in the 2000s.

Would it be possible to reupload this? Thanks!