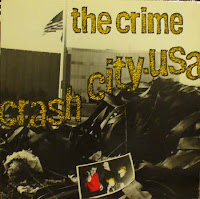 This one's a no brainer.  This is what I call classicist power-pop to the nth degree, particularly the resplendent "Behind Those Eyes" which could go head to the head with the best of The Pezband, Spongetones, or Shoes.  "Trudy's Got a New Boy" is also as about as quintessential as the genre gets.  The reminder of Crash City USA is actually quite rollicking, sporting an unmistakable celebratory fervor.  The Crime were a Memphis quartet with no apparent ties to Big Star or the like, but co-producer Jack Holder was a Bluff City pop scenester from the early days from what I've read.  I'm sure these guys have more of a back-story, but all I could find was this lil' blurb:

The Crime ruled Memphis new wave in the early '80s. In those days, everyone had a skinny tie and a Rickenbocker, but not everyone could write a song. Those that could often never left their parent's garage. The Crime did it all - killer harmonies, ripping guitar leads, and panty-littered stages.

Apparently members later formed a spinoff band called The Everyday Parade who you can bone up about by going to their Myspace page.

Any way you could repost this? Thx so much in advance!

Can you re-up this please? Thanks in advance. :)

Hi there
could you please re-up this one?

So I was a witness to the rise and demise of this band in Memphis at the time (I was playing in bands that were similar in style, trying to compete, and not really succeeding). The original line-up, which made them regional sensations, included two players who weren't on this album, guitarist/singer Jeff Golightly, who did get a co-write and sang vocals on one cut), and the original bass player Randy Moon. What happened was that these two, with Rick Camp (guitar)and Carlton Rash (drums) all came from a burb of Memphis called Frayser, and their high school crowd was a tight and rowdy and loyal crowd. They invaded downtown and midtown Memphis during a time when there were quite a few good gigs for new wave music. We are talking about 1979-1983. Wherever The Crime was playing, that place would be the place to be. Success, however, made things tough on them. First, Rick Nethery, who played in a very popular band called Bluff City (also mostly Frayser boys) was an incredibly dynamic performer, and he wrote songs and sang. Randy Moon was a great bass player and had excellent stage presence, but was not the dynamo that Nethery was. So there was, shall we say, a change made. It was hard to argue with the results, in spite of the fact that it broke the original spell. There was excitement around the band because everyone was saying "now they'll get a contract." They began to tour on a wider scale. The contract did come. But along with it, the change that, I suspect, killed the band. I knew most of these guys and liked them all. I am not pointing fingers. I am describing what happened. I do not know the inside story, however, of what happened next, but somehow Jeff Golightly was replaced by Larry Wood. Larry was a great musician, good looking, as all these guys were, sang well (back-ups, unlike Golightly who shared the leads) and played keyboards as well as guitar. But the real magic had come, in my opinion, from the way that Golightly and Camp meshed as guitarists and singers --they both played guitar left-handed as well, which gave the band an interesting look. The magic was just gone. The album did not capture the energy of the actual band at all, in any of its incarnations. That band was so much better than that album. The album doesn't suck, but it isn't special. The band actually was special. Golightly and Camp still play together around Memphis in a couple of projects, Jeffrey and the Pacemakers, and they put out an album of originals under the name The Everday Parade --very good album. Randy Moon went on to play with several very cool bands, especially Rock-a-billy stuff, and still plays around Memphis. I have no idea what happened to the others. So that's the story :) I don't mind fielding question about the scene in Memphis during that time. Oh, full disclosure, I later played in a band with Jeff Golightly, and we still chat occasionally, but I never asked him what happened inside The Crime.

Just seeing this now Randall! Appreciate all that history. You enlightened us greatly. Wish I could have seen them.