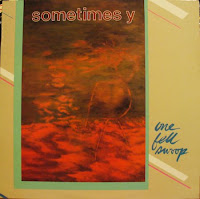 Even though I bought this close to a year ago, I've been on the fence about posting it, due to an impending but non-existent reissue. Originally recorded in 1984, a recently reunited Sometimes Y planned on a 2004 CD rerelease of this album (their debut), but thus far it has not come to fruition. A follow-up LP, Be Happy, in 2003 however made it to market, but their Myspace page has been idle for a year now. Anyhow, the Butch Vig produced One Fell Swoop is chockablock with crisp, jangly pop, fitting well within the trends of it's quarter-century old release. A more pedestrian Game Theory comes to mind as a semi-accurate candidate for comparison to this coed Minnesota trio, which essentially translates to 'good,' just not remarkable. A little on the goofball side at moments, Sometimes Y are at their sharpest when they keep their collective eye on the ball, with "Walk Away" and "The Chores" being the choicest picks on Swoop. Check out the bio on Myspace for further infotainment.

Thanks so much for posting this. I played this like crazy on my radio show back in '84 and only have it on a crappy sounding cassette. "Walk Away" is gonna appear on my WCVF Years collection, but will sound much better thanks to you!

No way? I'm surprised that anyone's famiair with this. The band should be flattered!

You know, that's the way it was back then. Bands would get their records to college radio stations and people like us would discover them. I guess the interweb does that now but it's so sprawling...

Wow!. Thanks for the great post. I attended Madison from '79-'84 and Sometimes Y was my favorite local band. I was a fan of Spooner as well, but Sometimes Y was right in my wheelhouse. Good memories of them opening for Burning Spear at the Mifflin Street Block Party in the early '80s. This is one of the LPs I regret selling when I sold my collection in the late '80s in favor of CDs (had no idea the ability to convert to digital music was only 10 years away). I hope this album is re-issued as some point in the near future.

Did you get that Dave, Sue, and Felix!!