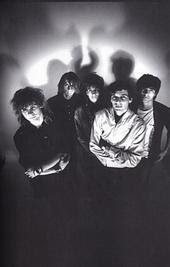 Green River's slot this Sunday on Sub Pop Records 20th anniversary shindig at Seattle's Marymoor Park conjures up some bittersweet emotions. For many, many years I promised myself that I would go to Seattle if by some miracle there was a Green River reunion concert. Assuming it would never happen, I visited the northwest for the first time last October, and wouldn't you know it... With airfare being what it is these days, I can only keep my fingers crossed that their set will be taped for my vicarious cravings (in fact, there are already recordings of Green River's "secret show" at Seattle's Sunset Tavern on July 10th making the torrent rounds as we speak).


Even if Mark Arm, Stone Gossard, and Jeff Ament had gotten jobs as shoe-salesmen, and not gravitated to godhead status in Mudhoney, Pearl Jam, and Mother Love Bone, Green River would have been every bit as significant to the fans and musicians that revere them to this day. Although my discovery of Green River was slightly posthumous, they were a band that defined my high school years. Corralling a bruising amalgamation of punk, metal, and to a lesser extent, blues, Seattle's fabulous-five wrapped up the whole enchilada in a frayed, feedback-addled tourniquet of raw, white-hot power. Motifs of boredom, teen angst and romantic frustration were not merely anguished over, but pushed the mental envelope to it's breaking point, and boy, was it ever cathartic.


Though tracked at a meager bitrate, this so called "final show," performed in L.A. is still a commendable memento. This show was a part Green River's five day tour down the West Coast. The tensions in the band come to a head at this show, but 21 years later, who would have guessed?

Great band...
sorry but i can't download...(Rapidshit it's the problem)...can you try to upload the files to servers like mediafire or megaupload :)

any chance you can re-up this Green River set. Thank you,,

I happened to be in San Francisco and,caught their show a day before this at a TINY but great club called The Chatterbox with Dr Frank (MTX). You could tell that there was tension within the band but, of the maybe 10 Green River shows I ever saw...this was only topped by their set at The Town Pump in Vancouver opening for SLOW'S final show.