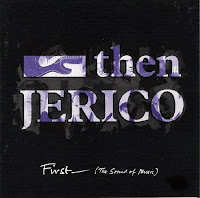 Bit of a guilty pleasure here. As was the case with the long defunct MTV News weekly program, the broadcast would often conclude with a spotlight on some hot-shit, up-and-comers, and in 1988, that was how I became acquainted with London, England's Then Jerico, who I was fascinated with from first listen. Like most bands, Then Jerico were signed based upon precedent. The precedent, in their case, hinged on no less than the two biggest bands on the planet - Duran Duran and U2. TJ didn't quite have the sex appeal of Duran, nor did they adequately exude the visionary aptitude of Bono and Co., but sonically you couldn't ask for a more perfect melding of the two (not that anyone was pining for such a combination, mind you). Sprawling, yet wholly listener friendly, TJ's debut, First...wasn't a milestone in the grand scheme of things, but no doubt intelligent and stylish late '80s synth/guitar pop that still impresses.


According to Wikipedia, the album generated no less than four singles in the UK, but were largely low charting. Typically, the album's more affecting cuts like, "Laughter Party," and "A Quiet Place (Apathy and Sympathy) weren't singles. First was released in the UK in 1987, while the domestic version saw a delayed release a year later. This rip is from the American incarnation, which thoughtfully included three bonus extended/remixed cuts. The album was a flop Stateside, but their 1989, followup, The Big Area, produced a bona-fide hit for TJ in form of that album's title track. Check out Allmusic's bio for further historical data.
01. Let Her Fall
02. Blessed Days
03. Laughter Party
04. Stable Boy
05. The Motive (Living Without You)
06. Muscle Deep
07. Prairie Rose
08. A Quiet Place (Apathy and Sympathy)
09. Play Dead
10. The Hitcher
11. Let Her Fall (UK mix)
12. Prairie Rose (UK extended)
13. The Motive (Living Without You) (U.S. Extended)
Now on Amazon
Posted by spavid at 5:48 PM

I have another of their albums - Big Area - here somewhere.

This is a very nice little album. Ah the college radio memories.