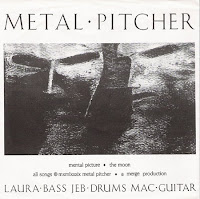 The once love affair between Superchunk's Mac McCaughan and Laura Ballance may not have entailed the turbulence, or for that mater, fatal outcomes of Sid and Nancy's or Kurt and Courtney's respective arrangements, but it did yield no less than eight 'chunk LPs, a bazillion singles, and this rather arcane precursor. Although this 7" was reportedly limited to a mere 300 copies, thousands of people have already heard Metal Picther, or more specifically the A-side, "Mental Picture," courtesy of it's inclusion on the Merge Records fifth anniversary compilation, 5 Rows of Teeth (which I strongly encourage you to buy).


Merge Records, catalog #3, A Careful Workman is the Best Safety Device is the first publicly released collaboration between Mac and Laura, predating Superchunk (originally named Chunk on their first single), by lets say, a whopping six months or so. Rounding out the trio with Jeb Bishop (also of Angels of Epistemology) on percussion, Metal Pitcher were far more rudimentary than even Superchunk's initial singles and self-titled debut LP, particularly with Laura's single-chord bass-lines, so straightforward that even Sid Vicious himself wouldn't have a legitimate excuse to fake them. This is a neat little artifact, especially to completists, but it's easy to understand why these two numbers were kept under a separate umbrella from Superchunk, even though the band lineups were 2/3 identical. A Careful Workman... is Metal Pitcher's discography in total.